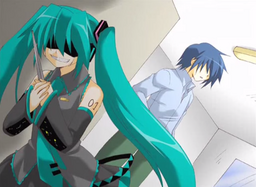 Scissorloid is an original yandere Hatsune Miku and Megurine Luka song. The song tells the story about Miku and Luka living together with their "Master". The two VOCALOIDs would sing together and share "Master" but eventually, Luka was starting to get more attention than Miku was, who grows jealous and upset. She started to resent having a "younger sister", afraid that "Master" was growing tired of her. And though she appreciated Luka's comment about wanting to become a diva like Miku, she finally came to a decision. Miku attempted to destroy Luka once and for all while she's recharging by cutting the plugs using scissors so she would not have to share "Master" with her anymore.

Luka awakens and notices Miku in her room. She remarks in a sweet tone that she was happy that her "older sister" was paying her a visit. She continues to throw compliments at her, saying how she was cute, kind, and the best diva in the world, causing Miku to hesitate and regret trying to kill Luka. Once Miku let her guard down, Luka takes advantage of this and stabs her in the stomach with a knife, killing her. Luka finally has their "Master" all to herself, making him exclusive only to her.