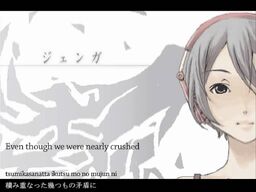 "Jenga" is an original song by 40mP featuring Hatsune Miku. It is a song full of the Jenga game metaphors, describing Miku and her lover in a shaky relationship that starts to collapse while they're trying to find their future. Then the relationship collapses like the Jenga tower when someone makes a wrong move, but Miku refuses to give up and suggests to pick up the pieces before their memories fade away.