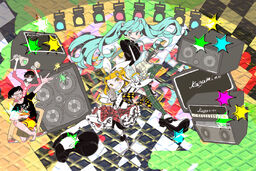 This song was uploaded on October 5, 2010, and has reached over 200,000 views. It is emon's first work to have reached the Hall of Fame on Nico Nico Douga.

This song is featured in the albums emonloid the original version and emonloid2 as a Hachiouji-P's Remix.

Retrieved from "https://vocaloid.fandom.com/wiki/ジュリエッタとロミヲ_(Julietta_to_Romeo)?oldid=1088898"
Community content is available under CC-BY-SA unless otherwise noted.