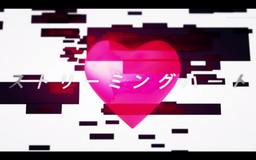 "Streaming Heart" is featured in the album Conti New, which was released March 26, 2014. Additionally, this song has made it into the Hall of Legend, reaching over a million views. In fact, it is the only VOCALOID original song updated in 2014 to enter the Hall of Legend before 2015.

The lyrics of this song are unusually vague, so that even the perspective of the singer is ambiguous. In both cases, the song is about the ending of an abusive relationship, perhaps the same one mentioned in one of DECO*27's previous songs, "Mono Poisoner." Both the man and the woman in the relationship know that it isn't working out, but the girl is passive and is afraid to speak up, while the guy is too full of pride to drop things.

The first interpretation is from the perspective of the man. He begins to see another girl while still in his relationship, who Miku represents in the PV. The second interpretation says the Miku is representing the heart of the girl, and the song is also sung from that perspective. Her heart is pushing the girl to leave the relationship, but she can't quite do it. The heart manipulates the girl into finally resolving to end the relationship. Even when the boy tries to keep her, she manages to get him out of her life.

Yeah, I say all kinds of things
But please try to find
The space between what I say and what I mean
I've hidden away so well

This emotion I can't pin down
I wonder where it's headed
I almost drowned, and in return
I found the oxygen to breathe

I'm such a wimp
The sensation of falling
Feels so good

After all, if there was another me
I suppose I'd be happy
Today I'm the girl
Like fools we play our parts

I know it's EGOMAMA (selfish)
But I can't stop

I just wanna say bye-bye
It's no fun being me
Let's just give up
Enough already...

Yeah, I've said all kinds of things
But please try to find
The space between what I say and what I mean
I've hidden away so well