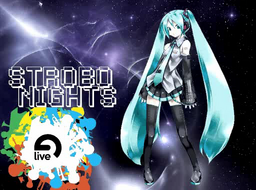 "Strobo Nights" is an early song by kz of the now disbanded group livetune, featuring Hatsune Miku. A vibrant electropop song, it is over five minutes long, and bears obvious resemblance to other early kz works such as "Packaged". It has entered the Nico Hall of Fame and currently has over 856,000 views.

I Am Not A Robot Project's Chorus Cover

Retrieved from "https://vocaloid.fandom.com/wiki/ストロボナイツ_(Strobe_Nights)?oldid=1089111"
Community content is available under CC-BY-SA unless otherwise noted.