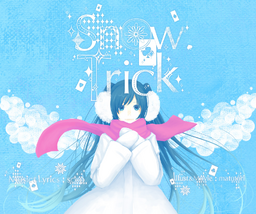 "Snow Trick" is an original song by Scop, described as a love song about the end of winter. It has entered the Hall of Fame and is featured on the album Vocaloseasons ～Winter～.

Retrieved from "https://vocaloid.fandom.com/wiki/スノートリック_(Snow_Trick)?oldid=1128021"
Community content is available under CC-BY-SA unless otherwise noted.