"Snowman" is an original song by halyosy, commissioned by SEGA for Project mirai 2. The game also offers a vocal switch for Len.

An interpretation of this song is that a lonely boy's wish "I want to be with you" is granted by "the magic of winter" when his snowman (KAITO) comes to life. He asks what the boy is doing here, to which the boy replies that he lied to his mom and starts to cry. The snowman tries to comfort him, but he could not with his fake eyes and hands. The boy continues to lie to his mother, saying that he's good with studying, sports, and has a lot of friends. However, he says that if he's not a good boy, his mom will disappear soon. The snowman helps him and the boy takes his classmates to his mother and shows how he's not lying, to which his mother lies saying that she'll always be with him. With the snowman's deed done, he watches over them as he melts, saying that spring is waiting for them. 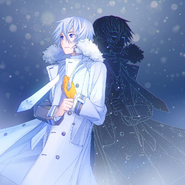 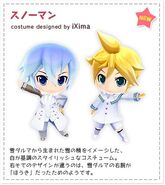 KAITO and Len's Snowman modules for the song, designed by iXima, featured in Project mirai 2.