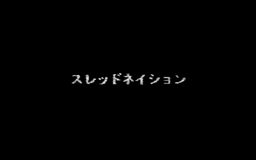 "Threadnation" is a techno song by EZFG featuring KAITO. However, instead of being uploaded to his Niconico channel, it was uploaded to that of Dwango User Entertainment, Inc., under the name "Who's the VocaloidP!?".  It was hardly a mystery, however, as both the song and the PV bear many similarities to EZFG's other VOCALOID works, most notably "Cyber Thunder Cider".