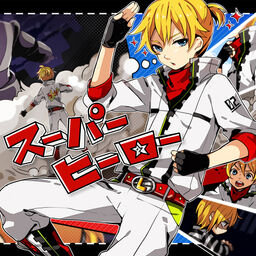 In the story depicted in the song and PV, Len decides to become a vigilante, taking inspiration from a superhero show he watched on TV as a child. At first he starts out doing simple heroics, such as stopping thieves, picking up litter, and saving kittens, but eventually he comes to realize that the true enemy is the government itself. Part of his plan involves taking a few lives, which Len considers to be a worthy sacrifice, however, the public does not agree and they turn on him, branding Len a wanted murderer and terrorist. Len is still in denial of the reality of his actions even as he is dragged away to prison, saying that he was just trying to be a super hero like the one on TV.

The song was featured in the albums Vocalogemini and from Neverland ~Best of Nem~.