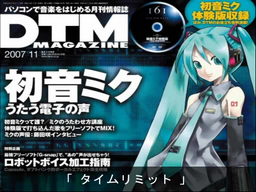 Tatami-P's first original VOCALOID work. The theme of this song is the 10-day trial version of Hatsune Miku on DTM Magazine October 2007, hence the title of "Time Limit".

This song was performed at the Miku no Hi Dai Kanshasai 39's Giving Day concert.

Retrieved from "https://vocaloid.fandom.com/wiki/タイムリミット_(Time_Limit)?oldid=1102618"
Community content is available under CC-BY-SA unless otherwise noted.