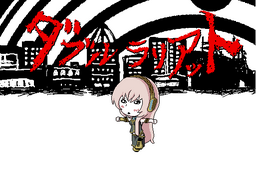 The singer of "Double Lariat" talks about how they continue spinning around endlessly without stopping. Despite the fact that the singer's friends are farther reaching and better at spinning, the singer persists in trying to increase their reach, starting from 85 cm to 250 cm and then reaching 5200 cm, at which point the singer starts flying. Finally, with a reach of 6300 km in radius and tilted at 23.4 degrees, the singer looks down and sees a colorful scene that they didn't notice before. The singer finally asks to be accompanied if they someday tire of spinning.

A possible interpretation of this song is that the singer is the Earth itself; its radius is approximately 6300 km and its axial tilt is 23.4 degrees.

Another interpretation of the song is persistence, that one should chin up, never look back and never give up. Continue doing what you do and, in that way, extend your reach not only in one of your favorites, but throughout the world and the universe.

With over five million views, "Double Lariat" is the most popular Luka song on Niconico and one of the highest-viewed VOCALOID song uploads on the website. On YouTube, it has over two million views; while still a considerable amount, this puts it well behind several uploads of Dixie Flatline's "Just Be Friends", which share a combined total of over twelve million views.

"Double Lariat" was released as a single by KarenT on November 4, 2009.

Written by an unknown artist, this version of the lyrics was used in the english version of Hatsune Miku -Project DIVA- F 2nd.

Just spinning was fun enough I could've gone on forever
But I spun so long I forgot how to stop
Everyone else spun better than me
Oh well, I sighed and pretended not to care

What do you think? Would my former self like what I've become?
Despite my eyes spinning and my axis wobbling

Before I knew it, I saw the streets at a 24.3 degree angle
Turn a color I'd never seen

Contest Entry by tk28 for the ＳＧコス２ contest 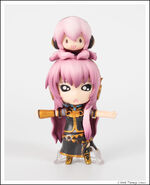 Alternative version of the monster "Everlasting Dreamland - Megurine Luka", showcased for promotion and in-game use.