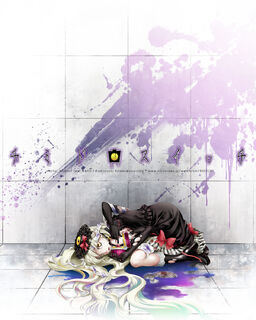 “「The switch was pressed, but not by me.」 The condition is serious.”

"Blood-Stained Switch" is an original song by Akuno-P. It is part of The Evillious Chronicles.

The song takes place in BT 1013, on Second Peroid. It talks about an anonymous girl who suffers of a condition known as Hereditary Evil Raiser syndrome. This condition makes her an embodiment of evil intent, which in her case manifests as a second personality.

After visiting her father at his work in the factory that morning, the girl found her father dead as consequence of pressing a dangerous red button. The girl tries to explain she didn't press the button, blaming her "other self". The girl is eventually confined and put under treatment, but argues that it's Doctor Barisol's fault because she told her that if she took her medications the other girl would stop taking control. The song ends with the girl trying to tell Doctor Barisol that she isn't a bad person and begs her not to give her an injection.

Retrieved from "https://vocaloid.fandom.com/wiki/チミドロスイッチ_(Chimidoro_Switch)?oldid=1200420"
Community content is available under CC-BY-SA unless otherwise noted.