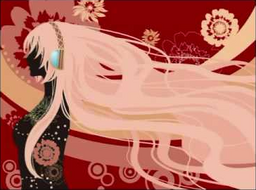 FatmanP's eighth published work, "Discommunication", tells about a girl's self-loathing as a result of a one sided relationship. She sings about the "discommunication" between who she thought she was and who her former partner saw. She has decided that though her former lover will never hear her song, she will sing her song anyway.

The song's lyrics are somewhat vague. Some theories suggest that she uses "one-way traffic" as a metaphor for the direction of their relationship (always to her, with her never reciprocating); however, a darker theory suggests that she may be contemplating suicide, as "A one way street" can suggest a way with no return.

This song has been featured on Vocaloid Love Songs ~Girl's Side~; it peaked at 7th on the Daily Nico Rankings on January 20, 2010.

"Discommunication" has entered the Hall of Fame.