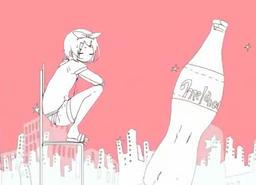 Not too long after Junky's song Melancholic reached 1 million views on July 12, 2011; the song which has the same illustrator and composer; Twinkle was uploaded two days after it was recorded. Twinkle reached over 400,000 views and it didn't take long for it to reach 100,000 views. It's also featured in Nico Nico Douga's compilation album V Love 25 ~Aperios.

Twinkle's plot; as it is a reply song from Melancholic, tells a song of a girl in love. The heroine in Twinkle is actually the sister of the heroine in the song Melancholic. In the end, saying, "one day you will realize that this is love."

This song has also appeared as sheet music in the Vocaloid Best selection series.