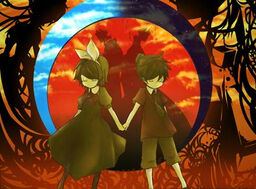 ““I’ll be the Day, I’ll be the Night, Together we make a beautiful orange sky””
—Author's comment

"Twiright Prank", the fifth song of the Story of Evil series. Originally composed by mothy for the Theater Play event, it was performed by Asami Shimoda. The song shows a small snapshot of the princess and servant's lives as small children, avoiding a mysterious "demon" in the twilight. The demon says he is hungry, and the two, having buried a chest in the sea, are running from him. The two decide to "split" day and night between each other, Riliane being "day" and Alexiel (who later became known as Allen) being "night". Alexiel eventually realizes the demon will be always hungry no matter what and decides to share his snack with the demon. In return, the demon tells Alexiel a secret about the ocean, that if you put your wish in a glass bottle and throw it out into the sea, it will come true. Alexiel promises to later share this secret with Riliane.

Though mothy has already released its cover with Rin and Len on his "EVILS FOREST" album, he later uploaded it on Nico Nico.

He commented, on his blog that he purposefully changed the spelling of "Twilight" to "Twiright" in the video he uploaded. Also he explained he did that because "right" means "correct" and "normal", "twi" carries the meaning of "twist", the ones who are performing it are "R"in and "L"en, and the prince gave a sweet to a "demon" while the princess did not in the song.[1]

This song has entered Hall of Fame

Retrieved from "https://vocaloid.fandom.com/wiki/トワイライトプランク_(Twiright_Prank)?oldid=1195634"
Community content is available under CC-BY-SA unless otherwise noted.