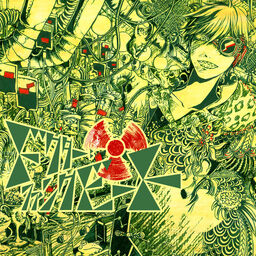 This song is part of nyanyannya's "Lead Princess of the Color Stealing World Series". In it, KAITO plays the scientist Doctor Funk Beat, who at first glance seems to be, a happy-go-lucky doctor that claims he can give everyone happiness. However, in reality, he gives everyone something for them to cope with their misfortune, makes them believe in their hallucinations, such as becoming a famous star just because you think you are one, or gives them medicine and makes them think that it's happiness. He seems to like seeing his patients suffer, making his most beloved thing "happiness".

This song entered the Hall of Fame. It was released as a single of the same name, and featured in the second disc of the album Kadoh-Anna-Ruk=Cyanotype, as well as in the compilation album KAITO 10th Anniversary -Glorious Blue-.