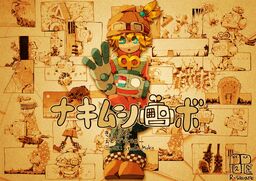 “Because I wanted to communicate with you.”
—Author's comment.

"Nakimushi Robot" is an original Japanese VOCALOID song featuring GUMI. It is producer Ramune's 12th work. The names of MV's main characters are Sabi (the robot) and Hakase (the girl).

note: parts in italics appear as MV text only