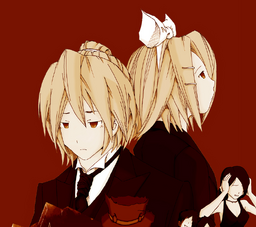 The song was based on Hinata Haruhana's story Umi ha sono nazotoki wo nozomu noka? (海はその謎解を望むのか?), however, the 'long' version of Nazotoki uploaded in June hinted it was a 'different' version, similar, but not the same.

It starts with a one-armed detective and a girl alone in a room. They were discussing the 'mysteries' that had occurred.

The first mystery is the man who drank the poisoned wine, the detective's 'answer' to that case is "The man knew then that it was his fate to die anyway," meaning the man did that on 'purpose'. The detective kept on asking the girl who the culprit was, while the girl just listened to him quietly.

The second mystery is the people falling into the ocean. He questioned whether the culprit was in the group as well. "Only mistake on my part was that the other Detective was dragged into it," the detective said, while the girl grabbed a knife in her pocket. He asked who the culprit is again, saying everything is right in front of her; he wanted to start solving the mystery with the girl.

The third mystery (which is in the 'long' version of the song), is about a girl. What was in the girl's mind? The one-armed detective narrowed his eyes slightly, the instant of darkness took the girl's breath away.

Also, in the long version, it was mentioned that the detective knew that the girl had a knife with her. "After everything ended, you, my darling, arrived here, hiding that knife," which is why he could defend himself easily when the girl attacked him with it.

He said to her that he was the culprit, and also mentioned he didn't want the girl to know. The detective gave time for her to run, and if she didn't, he will have to kill her, because everything happened right before her eyes.

The song was one of Len Append Power version demo; along with a rearrangement.