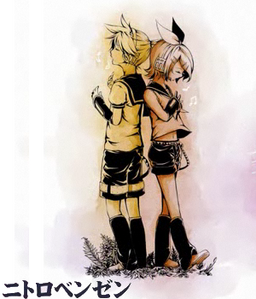 "Nitrobenzene" was first uploaded on August 5, 2009. It is Owata-P's second original work using Kagamine Len, (the first being Benzene) and is the second track to his Benzene＼(^o^)／ Series.

It's also featured in Owata-P's album "Benzene \(^o^)/", and to date has over 280,000 views. Owata-P said in his description that this is the sequel to "Benzene", and that he wants everyone to enjoy the "meaningless" song.

It is said that the "people who laugh" in "Paradichlorobenzene" are the viewers who watched "Benzene" and "Nitrobenzene", though interpretations are open to it.