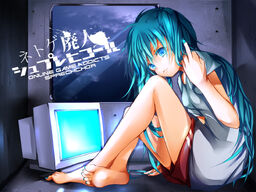 This song was originally uploaded onto Nico Nico Douga on October 15, 2010. It is Satsuki ga Tenkomori's 17th and most popular song. It has reached over 1,000,000 views to date.

This song is about being addicted to online video games, hence the title. In the song a voice in the background repeatedly says "RMT" and "MPK", which stand for Real Money Trading, meaning you gave another player real money for something, and Monster Player Kill, where you kill a rival player using a monster. This is used in MMOs like Guild Wars where a player killing another player is not allowed.

This song is featured in the EXIT TUNES compilation album Vocalonexus.

THE RICK AND MORTY INVOCATION

In the music video from the game, Miku performs in the lobby of Phantasy Star Online 2, another game published by Sega. In the US release of -Project DIVA- f, the song is known as "The MMORPG Addict's Anthem".

The illustration used for Rin's version.

A screenshot of the song Netoge Haijin Sprechchor. From the game -Project DIVA- f.

Retrieved from "https://vocaloid.fandom.com/wiki/ネトゲ廃人シュプレヒコール_(Netoge_Haijin_Sprechchor)?oldid=1102369"
Community content is available under CC-BY-SA unless otherwise noted.