The song begins with Nemesis Sudou (GUMI) approaching a man and pointing her gun at him. She thinks of her mother as she recalls how her boss forcing her to shoot her own lover sent her onto her vengeful path. Saying goodbye to "Mr. Père Noël", she offers him the choice of dying by the fire burning the house or a gunshot. Nemesis then proposes he gives back his entire fortune to be spared, only for the man, Gallerian Marlon (KAITO), to snap that he wouldn't do so. Thinking back on her childhood, Nemesis notices the man comforting his Doll and declares him mad, remarking on how she had killed her half-sister years ago. Bidding her father farewell, she wonders why her mother had loved such a man and shoots him in the temple.

One of the tracks of Akuno-P's of Seven Deadly Sins series. It is notable in that it took three years between the release of "Gift from the Princess who Brought Sleep" and "The Muzzle of Nemesis", leaving fans frustrated and confused.

This song is featured on Akuno-P's album with the same name and Seven Crimes and Punishments. 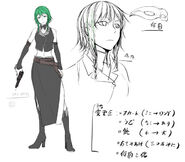