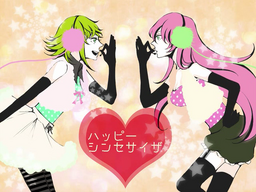 "Happy Synthesizer" is a bouncy techno-pop love song about wanting to play a melody that will reach your beloved's heart. Considered a staple of VOCALOID music, it is by far EasyPop's most popular song, with over four million views on Niconico.

On May 14th, 2020, EasyPop tweeted a short video with the caption "10th", revealing he is working on a 10th Anniversary Edition of Happy Synthesizer, which will be uploaded on November 22nd, 2020, exactly 10 years after the song's original upload. [1]

Luka's "Happy Synthesiszer" module designed by kiki from the game Project Mirai.
Gumi in her Happy Synthesizer outfit as shown in the Project mirai PV.
Cover for the novel adaption

Retrieved from "https://vocaloid.fandom.com/wiki/ハッピーシンセサイザ_(Happy_Synthesizer)?oldid=1180814"
Community content is available under CC-BY-SA unless otherwise noted.