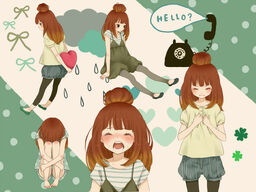 Hoehoe-P's 8th original published work, and his most notable song. The song is about people who think they're "worthless".

This song is featured in the single Hello/How Are You, and Hoehoe-P's albums Fantasm-O-Matic and Waltz Of Anomalies (covered by Buzz Panda). The song is also featured in the EXIT TUNES compilation album Supernova 3 and Osamu Raisan Selection vol.2.

Miku's costume for the song, designed by mztm, featured in Project mirai.

Retrieved from "https://vocaloid.fandom.com/wiki/ハロ／ハワユ_(Hello/How_Are_You)?oldid=1163095"
Community content is available under CC-BY-SA unless otherwise noted.