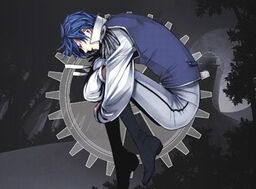 "Heartbeat Clocktower" is the fourth song in the Clockwork Lullaby series. The song was originally on Akuno-P's piapro page in 2009 and was exclusively for his fans following him on piapro. Eventually, mothy made a "final" version of the song, with an added tag "(F.V.)" (Forest Version), uploaded to Niconico on April 26, 2010.

The song concerns a mysterious clocktower and its actual guardian, Gear(KAITO). The dead owner, Gallerian Marlon(KAITO) sinner of Greed and former guardian of the clocktower, the "Collector", created a theater for the "Collectibles" where they forever enact their story.

Gear's main concern is to keep the Clockworkers Doll (Miku) alive through the clocktower, and if it stops, she will die.

Performing his task day by day, he describes other inhabitants of the clocktower, including the Master of the Graveyard (MEIKO), who devours any helpless visitor who had the bad luck to end up in the theater, and the young girl Lilith Balledold (Rin), the Waiter who acts as if she "the main character", but expresses sadness for the loss of her "other half".

He also observes how the Kayo's Scissors and the Venom Sword continue to be "dormant". Gear, realizing that the clock was going to stop soon, sacrificed himself to keep it running by taking out his own heart and using it to power the clocktower.

This song is featured on the following albums:

Retrieved from "https://vocaloid.fandom.com/wiki/ハートビート・クロックタワー_(Heartbeat_Clocktower)?oldid=1200407"
Community content is available under CC-BY-SA unless otherwise noted.