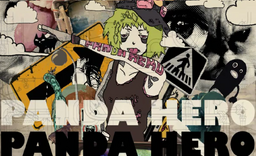 “How are you doing, this is Hachi here. I wrote the hero song..”
—Author's comment

"Panda Hero" is an original song by Hachi. It was uploaded to YouTube on October 1, 2013. The lyrics are vague and open to interpretation, although a popular interpretation is that it's about opium addicts playing a baseball game.

This song is featured on the albums OFFICIAL ORANGE, GUMI ROCK, VOCALOID 超BEST -memories-, and Vocalofantasy. It was also featured in Nico Nico Cho Party 2015.

This song has also appeared as sheet music in the Vocaloid Best selection series and again in the Vocaloid Superselection piano solo collection. This also song featured in the mook ボカロ☆バンドスコア, vol.2.

This song was featured in the Internet; Vocalekt Visions demo/concert event.