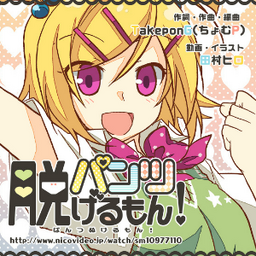 Chom-P's most notable work, and also his first collaboration with Tamura Hiro. It only took the song four days to reach Nico Hall of Fame (exceeding 100,000 views).

It tells of a story of a girl (Rin) who wants to "take off her panties" as a symbol of wanting "freedom"; wanting to not be nagged by adults. Later on she realized that she can choose whether to be mature or childish.