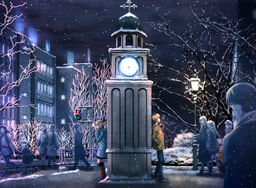 A couple hopes to reunite, but they begin to loose hope while they're waiting under a clock and they believe they've been abandoned. However they don't notice that the other person is standing on the other side of the clock.

A cover by Miku and Gumi was featured on Darvish-P's 5150 album.

A short Doujinshi was published online by Paraiso, the illustartor for the PV.

Rin and Len have been separated for half a year, Len having gone away. One day Rin recieves a text from Len telling her to meet him under the clocktower 08:30 pm on Christmas Eve. She replies that she will and goes to meet him. Unfortunetly, they wind up waiting at the opposite sides of the tower. Len wintesses Kiyoteru waiting for someone and they both cheer eachother up. Rin also witnesses Meiko having waited for a long time and decides to wait with her, only for her boyfriend Kaito to come running into her and apologizes for making her wait, and the heartwarming reunion makes Rin feel all the lonlier. As time passes, Rin and Len try to walk around the clocktower to check for the other but barely miss each other, and the more they wait the more they feel separated.