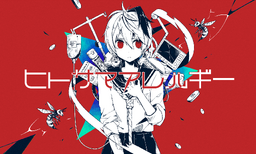 "Hitosama Allergy" is an original song by Kairiki Bear featuring flower. It seems to be about suicide and social anxiety.

This song has entered the Hall of Fame. It is featured on the flower compilation album Ichigo Ichie, as well as Kairiki Bear's album Inai Inai Reboot and collaboration album Venomer.

Retrieved from "https://vocaloid.fandom.com/wiki/ヒトサマアレルギー_(Hitosama_Allergy)?oldid=1094938"
Community content is available under CC-BY-SA unless otherwise noted.