Vocaloid Wiki
Register
Don't have an account?
Sign In
Advertisement
in: Hall of Legend, Songs with 10M YouTube views, Songs with 100K bilibili views,
and 10 more

“I challenged to tune Hatsune Miku's voices like a Japanese anime voice actor. Please enjoy the song and MMD anime. I can’t tell you how much I appreciate this :D.”
—Author's comment

"Viva Happy" is an original song by Mitchie M. It was uploaded to bilibili on July 11, 2015, and to Soundcloud on September 11, 2015. Like all of his VOCALOID works, it is noted for the realistic quality of Miku's voice. The video features many Miku MMD models.

This song has entered the Hall of Legend and exceeded over 10 million YouTube views. It also topped the Nico Nico Weekly Vocaloid Ranking during weeks 304 and 305. Hence, this is one of Mitchie M's most notable songs alongside Ohedo Julia-Night.

A short version of this song was featured in the "Cute Medley" of Project DIVA X.

Aa ah… Mic OK!
Here we go!
Let's get overdressed with miniskirt (kyun)
You will be shocked by "gap moe" (kyun)
I fantasize about love and my circuit is out of control but it's a lie and untrue stuff (Boo! Boo!)
Say to me "I I I…I love you" (yeah, yeah)
So, let me listen to the loose and cool beat
It's a "baribari" tune
Mm-hmm! Hey- hey- hey, hey! Mm-hmm!

(M・I・K・U)
Even if someone gets angry and forces me to do something
(kabaddi, kabaddi…) (Wooooooh!)
You don't have to get an answer so quickly
(kabaddi, kabaddi… fight!)
"Common sense" is a slang that adults use
A signal of faith reaches me from the unconscious universe!
"Hi!"
"Tadadaada!"

Hey some pure people you had a chance, but unfortunately, it didn't work out
You got an explanation and the person is just mad at me without a reason "The world isn't so easy as it seems to be, so…"
&＊¥;$※?◎× (Don't do it!!)
Transform into an avatar and take no notice of it
Ba-ba-ba… Virtual, Venus, Boost, Born with the Bass
"Meow~" 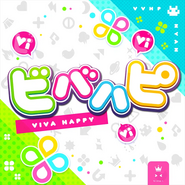