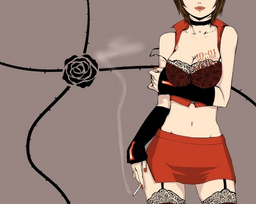 The song was first uploaded on December 20, 2008, and is OSTER project's first work using MEIKO; various utaites have covered the song. Unlike other works by OSTER project; she'd made the instrumental, named "pianoxforte"), first before making the vocals sung by the VOCALOIDs. It was when she bought MEIKO that she decided to add the vocals.

This song is featured on the albums OSTER-san no Best (with MEIKO Append), Cinnamon Philosophy, DEBUTANTE3, and Hatsune Miku "Magical Mirai 2014" Official Album. Covers and arrangements have been featured on additional albums.

In the Project Diva games, a vocal switch for Hatsune Miku, Kagamine Rin, and KAITO are featured. KAITO's version features a different dance routine than the one featured in MEIKO, Miku, and Rin's versions.

Day after day, I follow along with
The commonplace concerto that is me
Just follow the conductor's baton
And harmony is guaranteed

Downbeat
Your classic honors student, rather devoted
But you've gotta ad lib to the upbeat, or things'll get bland

If I close my eyes at three in the morning
And think only of you
My friends might say
That's not a good thing!

But those words do nothing to quench my thirst
And with that charmless phrase, my playing goes awry

Atop this scattered score
Before this love, already cracked, breaks to pieces
Bind it together with a kiss
The rhapsody begins to spin

Ride this accelerating rhythm of love
To test our feelings for each other
We can reach fortissimo tonight
Hold me tight, tight

Our voices overlapping
Will melt into the darkness
So don't worry

We're not doing anything wrong

This song was featured in the following concerts

Miku, Rin, KAITO and MEIKO's costume for the song, designed by Buuta, featured in Project mirai 2.

Retrieved from "https://vocaloid.fandom.com/wiki/ピアノ×フォルテ×スキャンダル_(Piano_×_Forte_×_Scandal)?oldid=1102257"
Community content is available under CC-BY-SA unless otherwise noted.