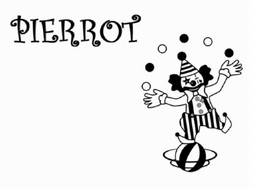 "Pierrot" is a song by KEI and is about a clown trying to cheer up a crying girl in the audience as the girl sees the clown is lying about it being fine and that the clown is being mistreated. The clown keeps telling her that it is okay and that it's its job to keep her entertained. The girl eventually tells the clown that it is lying, but the clown is in denial saying it hasn't told her a single lie. The girl then tells the clown to remove its mask and show its true expressions and not to be embarrassed about it because she would empathize (and cry with) it. The clown does so and realizes the face that it has forgotten and tells the girl the lying clown has disappeared after realizing the truth.

This song reached the Hall of Legend.