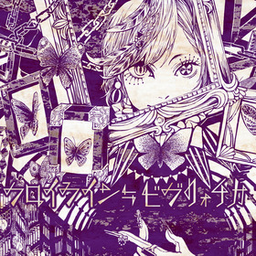 “It can’t be helped: those are the rules!”
—Author's comment

"Fräulein＝Biblioteca" is an original song composed by nyanyannya with MEIKO. It was released as a single and is featured on the EXIT TUNES compilation album Vocalocreation.

The song is part of nyanyannya's series "Lead Princess of the Color Stealing World Series." In it, Meiko plays the Auditor Fräulein Biblioteca, a judge who believes that the law is the "most treasured thing" that Princess Lidya is seeking.

This song has entered the Hall of Fame. It is featured in the single of the same name, as well as in the second disc of the album Kadoh-Anna-Ruk=Cyanotype.

Retrieved from "https://vocaloid.fandom.com/wiki/フロイライン＝ビブリォチカ_(Fräulein%3DBiblioteca)?oldid=1104622"
Community content is available under CC-BY-SA unless otherwise noted.