"Black★Rock Shooter" is a song by ryo, the lead member of supercell. Released in 2008, it is one of the most popular Hatsune Miku songs of all time.

"Black★Rock Shooter" is also the name of the character that both inspired and is featured in the song. She is an original character originally conceptualized by huke (Ryohei Huke), a Japanese illustrator who is best known for various original character designs, drawing Gears of War fanart and also producing work for Metal Gear Solid and the visual novel Steins;Gate. VOCALOID song creator ryo, once considered the foremost VOCALOID producer on Niconico, was inspired by huke's work and composed the song "Black★Rock Shooter" using Hatsune Miku; huke created the music video. The video was a hit on Niconico and YouTube, leading to the worldwide popularity of Black★Rock Shooter. Black★Rock Shooter has spawned many merchandise releases, an anime OVA, and an eight-episode anime season.[1][2]

Later, July 14, 2010, Ryo revamped the song with Miku's appends after they were released. The version of the song - the 2M MIX - was used as the opening for the Black★Rock Shooter anime and was released as a single. Additionally, it is featured on the split single Kocchi Muite Baby / Yellow.

On July 30, 2010, Crypton officially permitted fan-art/fan-fictions of Black★Rock Shooter on the Piapro website.[3]

This song was used in 2014 as a demo for YAMAHA's VOCALOID3, flower.

ブラック★ロックシューター (Black★Rock Shooter), often shortened to B★RS, is a 15-year-old girl who attaches a cannon on her left arm which shoots 20 rock bullets per second.

Although her appearance is similar to VOCALOID2's Hatsune Miku, Black★Rock Shooter is not a variant nor a derivative of Miku and only became associated with the VOCALOID due to the popularity of the song. In previous years Crypton had announced that the character has no relation with Miku's character, and once requested that users should not post illustrations of her on Piapro.[4]

Black★Rock Shooter tells of the narrator's despair and hopelessness as they wander aimlessly, searching for something important to them that they presumably lost. Eventually the narrator gains new hope and decides to move on into the future with courage. The video for the song became massively popular, featuring Black★Rock Shooter traveling through a bleak city and countryside, riding a motorbike and wielding weapons. With little explanation as to what she is, it spawned a fanbase that is dedicated to find the answers.

ブラック★ロックシューター (Black★Rock Shooter), the anime, is based on the titular character, who was originally illustrated by huke. The first animated pilot was released September 30, 2009 on DVD. The second animated pilot aired online July 13, 2010. It was release in Japan on July 24, 2010, and also broadcast online and subtitled in multiple languages.

In January 2012, an anime series aired in Noitamina's timeslot.[5] It had 8 episodes, and is a revamp of the original OVA.

Both incarnations feature the protagonist Kuroi Mato, who entered junior high school and met Takanashi Yomi, who is her classmate. They were opposite in temperament, but they became friends through their student life. After they advanced to the next year, they were separated into different classes and get estranged. At the same time, in the different world, Black★Rock Shooter, a girl whose eye has a blue flame, and Dead Master, a girl who has a big jet-black sickle, have been engaged in deadly combat.[6] Although the movie was delayed by one month, there was merchandised that was bundled with the DVDs to make up for the delay. 150 readers got the chance to see the movie before the sale (note: applies to Japanese citizens only).[7][8]

The official pilot was released on Japan Amazon for preorder; it was made for sale on the 30th of September 2009.

A number of promotional figurines[9] were released in July, distributed in the following magazines:

There have also been manga releases, but they are mere adaptations based from the characters of huke. One was a chibi 4-Koma called Black★Rock-chan found in Nano Ace. The other is Black★Rock Shooter ~Innocent Soul~ found in Kadokawa Shoten's Young Ace. Neither uses the plot of the OVA, but use the characters and make a stand-alone storyline.

This song was featured in the Miku FES'09 (Natsu) concert.

Animelo is an Anime-Central concert where songs from various anime are performed in a concert-like fashion. It was here that Miku appeared as a surprise in 2009. Not only Miku came, but Rin and Len's voice provider, Asami Shimoda, sang Kokoro as a teaser for introducing Miku, who sang みくみくにしてあげる♪ (Miku Miku ni Shite Ageru♪). The song "Black★Rock Shooter" followed Miku's appearance, along with its anime's trailer.

On August 25, 2011, an RPG game of the same name was made. It has no relations to the OVA's plot, and is another depiction of BRS storyline. The game follows the story of the eponymous character as she awakens from slumber in the year 2052 after an alien invasion had annihilated humanity in two decades ago. The BRS Game Website is updated with official information on the title's development. An international release is imminent. 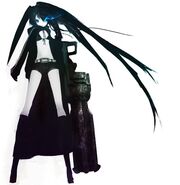 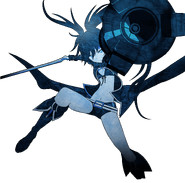