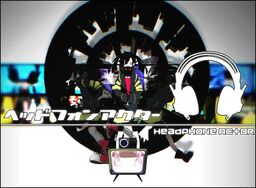 “A story about a day in which the world ends.
「Just once, don't doubt.」
”
— Author's comment

Takane "Ene" Enomoto (as a human) is very bored on this average day. She turns on the radio when a country's president, in tears, announces that the world is ending today. She had a half finished game with no save and a textbook. She was scared and to stop her body from trembling she put her headphones on. Listening to an unknown song, by an unknown artist, a voice from her headphones suddenly asks her if she wants to survive. She claims the voice is her own. It tells her to go 20 seconds ahead and cross the hill; for better or worse she will find out what her voice meant. On her way she crosses a crowded intersection and mentions a sobbing girl. Her voice tells her that 12 minutes are left. She says if everything is going to vanish, she has no other choice but to listen to the voice from the headphones. Many minutes pass as she runs, having only one minute left. Enomoto claims she can no longer hear the voice because the hill that she is supposed to cross is right in front of her. When she gets to her destination scientists congratulate her. She finds out her town was an experiment that is no longer needed. One of scientist calmly tosses a bomb. She is told she was living her whole entire life in a box. She then looks at her town, which is now a burnt wreckage. From her headphones she hears a faint "Sorry" and the viewers see an outline of Ene.

It is the dream Takane has before waking up as Ene.

The song was featured as the opening theme of episode 6 of Mekakucity Actors sung by LiSA.

This song is one of the tracks in the Kagerou Project.

This song is featured in the PS VITA game IA/VT -COLORFUL-.

A two-day music event at which IA made her first live appearance. She appeared as a 3D projection thanks a collaboration with Nippon Engineering. She performed with Shizen no Teki-P, and sang Children Record, "Headphone Actor", and World Calling.

"1st Place 10 - 11th Celebration LIVE: "KEEP HAVING FUN!'" was an event organized by 1st Place in celebration of over a decade of existence, featuring artists under queens label and IA PROJECT record labels, as well as several musical guest appearances. IA was featured in a hologram/live segment performing songs from producers/musical artists Shizen no Teki-P, Ishifuro, and ASY. She performed SEE THE LIGHTS, LIVEDRIVE, "Headphone Actor", One Two Hello, America, My Soul, Your Beats!, and "World Calling".