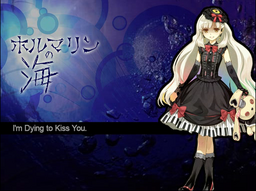 “Woooah, it seems like the new girl from EXIT TUNES is yandere! That's why I made a song with a yandere feel… or at least, I tried to give it a yandere feel!”
—Author's comment

"I'm Dying to Kiss You." is an original song by Deadball-P. He stated that since EXIT TUNES's new Vocaloid was inspired by yandere themes, he wanted to make a Yandere-esque song. This song was one of MAYU's demo songs.

This song has entered the Hall of Fame. It is featured in the album VOCALOID™3 Library MAYU SPECIAL 2CD.

Retrieved from "https://vocaloid.fandom.com/wiki/ホルマリンの海_(Formalin_no_Umi)?oldid=1200172"
Community content is available under CC-BY-SA unless otherwise noted.