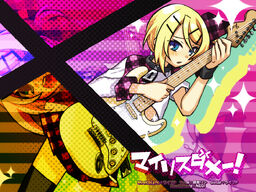 In the song, Rin sings about how she feels sexually harassed by the dozens of watchers on Nico Nico Douga, and desperately she asks to stop being given "Mylists" (which is NND's video favoriting system), along with the stalking behavior.

The song itself is a sort-of critique of NND's system, containing a lot of references to the popular Japanese video hosting site. At the end of the song is hinted that Rin secretly likes being mylisted, despite her previous complains.

Ironically, unlike many other NND videos where there are more comments than mylists, this song has more mylists than comments.

This song is featured in the EXIT TUNES compilation Vocalonexus and the compilation Rin x Guitar "HOWRING" (CD and DVD).