“Hey, it’s me, Hachi. I made this silly video that I hope will raise your spirits.”
—Author's comment

"MATORYOSHKA" is an original song by Hachi. It was uploaded to YouTube on October 1, 2013. This song was made for Miku's 3rd anniversary.

This song is a rather chaotic and addictive alternative rock composition which reached over 1 million hits with incredible speed (less than 32 days, a feat that most other well-known songs take from a few months to a year to achieve).

Most of the lyrics are nonsensically vague or ridiculous, with a slight hint of pain or sadness, giving the overall song a crazy and psychotic feeling. Therefore, the lyrics have been interpreted in various ways.

A Matryoshka is a Russian nesting doll. The intermissions are descriptions in many different languages from the Wikipedia article for them. The first is taken exclusively from the Japanese one, but the second combines information from other languages.

This song has entered the Hall of Myths and exceeded over 40 million YouTube views. Hence, this is Hachi's most noatble song, alongside "DUNE"; one of the most popular VOCALOID duets; and the first and so far only Hall of Myth song that is a duet. 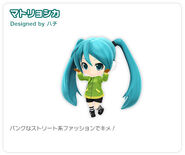 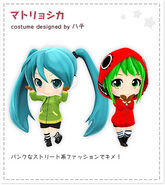 Retrieved from "https://vocaloid.fandom.com/wiki/マトリョシカ_(Matryoshka)?oldid=1199846"
Community content is available under CC-BY-SA unless otherwise noted.