Miku Pack was an offical magazine featuring art and music involving Hatsune Miku, as well as other Crypton products.

It features the official work from Ascii Media Works as well as a summary of some of the recent Miku centred events.

It was announced on the 27th November 2012, and was released on the of 10 December 2012. The magazine contains songs by producers and groups such as OSTER project as well as artwork such as those by hatsuko. It also contains a review of the 39's Caravan event as well as information on the Super GT event.[1] 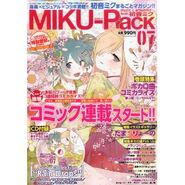 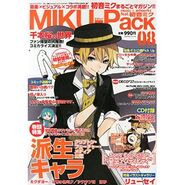