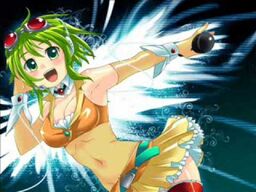 "Megu Megu☆Fire Endless Night" is an original song by samfree featuring GUMI. song is featured in samfree's album, Fever album and is the second song of the Night Series.

This song is featured in the game Megpoid the Music♯.

Retrieved from "https://vocaloid.fandom.com/wiki/メグメグ☆ファイアーエンドレスナイト_(Megu_Megu☆Fire_Endless_Night)?oldid=1088781"
Community content is available under CC-BY-SA unless otherwise noted.