"Melt" is about a shy girl who is in love with a boy. In her pursuit of him, she gets her bangs cut and encourages herself to look cute, all the while hoping he'd notice. Her love is pure; she loves him not because she is in love with being in love, but because she genuinely likes him, to such an extent she can't even bring herself to look him in the eye and feels like melting to simply be with him.

Later that day, it rains. Since the weather report was inaccurate, the girl is caught off-guard; while she does have a collapsible umbrella in her bag, she thinks it is too small. The boy therefore invites her to join him under his own umbrella. With her heart pounding, she is so happy she could cry, because in Japan sharing an umbrella is a sign of shared feelings and is associated with couples. When they reach the station, she almost tells him to hold her because she does not want to leave him, and can not believe herself.

Multiple Fanmade PVs for "Melt" exist; most of them feature Miku as the protagonist, acting out the events described by the song. The "boyfriend" character is often represented by a faceless person (a technique often used to represent "Master", or the VOCALOID user).

"Melt" and its PVs are so popular on Niconico and YouTube that it has been featured in some Nico Nico Medleys, and has many covers and parodies both by live musicians and other VOCALOIDs.

With over fourteen million views, the original upload of "Melt" on Niconico is the third most viewed original VOCALOID song on the site, behind "Senbonzakura" and "Miku Miku ni Shite Ageru♪". It isn't quite as popular on YouTube, although one reprint of the 3M Mix of "Melt" has over five million views. This puts it far behind other VOCALOID YouTube reuploads such as "Matryoshka" and "World is Mine".

When I woke up this morning
The first thing I thought of was you
I made up my mind, and cut my bangs short
Just so you'd ask me "Why?"

Melt! I feel like I'm gonna melt away
I can't tell you I like you, but then I...
Melt! I can't even look you in the eye
I won't fall for love, not me
But... I really do like you

Melt! Pulling into the station
The end of the line for us, so near, so far
Melt! I want to hold your hand in mine
Do we already have to say goodbye?
I want you to take me in your arms!
...You wish!

Miku's White Dress module, designed by yzk, for the song "Melt" from the game Project DIVA. 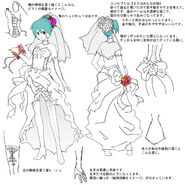