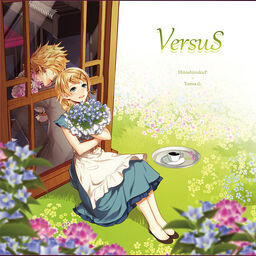 "The Rouge that Blooms in the Monochrome" is an original song by Hitoshizuku-P × Yama△ featuring Hatsune Miku.

This song is a spin-off of the Karakuri Series, it focuses on Miku, the leader of the Crimson Camellias, expressing her wish to make a difference in the world by blurring the lines between good and evil.

It was released on the album VersuS. Its themes are "Justice" and "Evil".