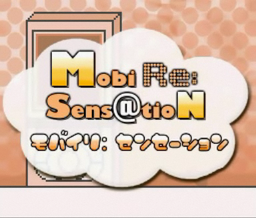 sasakure.UK's second VOCALOID work, a song about Rin attempting to gather her strength and confess to her loved one face to face rather than by cellphone.

"MobiRe:Sensation" was originally mistakenly uploaded February 3 with Miku as vocals; the video description was later changed to point to the Rin version after several comments questioned the video and video title.

Longer, arranged versions can be found on the albums Kaleido＊MIXture and Vocaloid wa Shuumatsudori no Yume o Miru ka?[1]