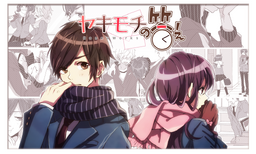 “If you were to go out with me...I'd show you that I could make you smile every single day( ･´ｰ･｀)？”
—Author's comment

HoneyWorks uploaded the song onto both Niconico and YouTube on March 14, 2013, since then, it has entered the Hall of Legend on Niconico and reached over 7 million views views on YT.

It's part of HoneyWorks' Confession Executive Committee Love Series and it tells the story of Mochizuki Souta and his unrequited feelings for his classmate, Hayasaka Akari. The song depicts mostly the jealousy Souta feels whenever he hears about the person Akari likes or when he sees her with someone else, wanting to keep her all to himself and hoping that things won't go well for her and the person she's in love with. Souta is, however, unaware that Akari isn't in love with anyone, despite it being something she longs about so much. In the end of the song, Souta asks for Akari to wait for him in the classroom after school and confesses to her.

A novel based on the song, called "A Solution for Jealousy", has also been written.

Cover for "A Solution of Jealousy", by Yamako.
Add a photo to this gallery