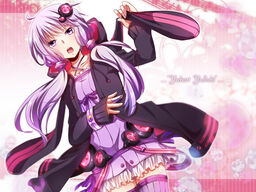 "Yuka Yuka☆Heavenly Night" is the fourteenth entry in samfree's popular Night Series of eurobeat songs. It peaked on the Weekly Vocaloid Ranking at spot #7, during weeks #335 and #336.

This song has entered the Hall of Fame. It is also samfree's last Vocaloid Night Series song he produced before his death on September 24, 2015.

This song was featured in the Tsuki no Hibiki album.

This song was featured in the AniNite '15 concert.

Retrieved from "https://vocaloid.fandom.com/wiki/ユカユカ☆ヘヴンリーナイト_(Yuka_Yuka☆Heavenly_Night)?oldid=1089300"
Community content is available under CC-BY-SA unless otherwise noted.