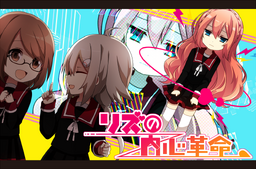 This is the fifth song of the Heisei Project. It centers around a girl named Lislette or Liz and her crush on another girl, Haku.