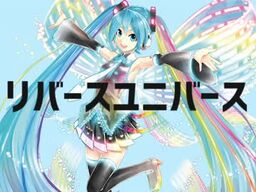 "Reverse Universe" is an original song by NayutalieN. It was made for Miku's 10th anniversary.

This song has entered the Hall of Fame. It is featured on the albums Re:Start and Object Z from Star Nayutan.

This song was featured in the Magical Mirai 2018 concert.

Retrieved from "https://vocaloid.fandom.com/wiki/リバースユニバース_(Reverse_Universe)?oldid=1095694"
Community content is available under CC-BY-SA unless otherwise noted.