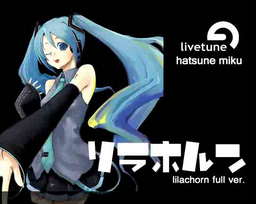 "Lilachorn" is a synthpop song sung by Hatsune Miku. The test version was uploaded to Niconico on September 21, 2007, soon after Miku's initial release. The full version of "Lilachorn" was uploaded two months later, featuring different tuning and a reworked mix; it is Kajuki-P's most popular work, having entered the Hall of Fame.

Notably, the song was featured on livetune's album Re:package, the first VOCALOID album to be released by a major record label. Additionally, Re:MIKUS featured a remix of "Lilachorn" by livetune's other initial member, kz.