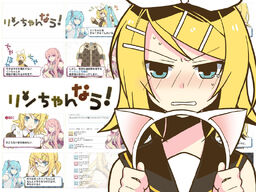 "Rin-chan Nau" was uploaded for the Kagamines' 4th birthday / anniversary on 2011 (as mentioned in the title). It's among Owata-P's most notable songs aside from his Benzene Series' hits. Owata-P mentioned in his blog that it was inspired by Hiro Tamura's doujinshi "Rin-chan Nau" on 2009, (and it's sequel Rin-chan Nau 1.5).

The song quickly climbed up top and only took 3 months (March 25, 2012) to reach one million views. It is currently Owata-P's fourth song to reach this amount, the others being "Turkish March - It's Over ＼(^o^)／)", "Paradichlorobenzene", and "Antichlorobenzene". When the song reached one million, Owata-P and Sezu each uploaded a cover of the song with themselves as the main vocals.

Rin-chan Nau tells a "story" on how Miku and Luka are overly attached to Rin, to the point they border harassment. They bother her in any way possible and talk about the most trivial things about her, while they try to get "cute" reactions from her.

The sequel/parody, "Len-kyun Nau!", was uploaded for the Kagamines' 5th anniversary one year later.

On December 27, 2012, it was announced that "Rin-chan Nau" would have a novel adaptation written by Sezu and supervised by Owata-P, to be published on March 27, 2013, with a comic released on the same day illustrated by Hiro Tamura. The title of the novel being "Rin-chan Nau SSs", and the comic "Rin-chan nau ver. 0".

It is said that the adaptations will follow Hiro Tamura's doujinshi's plot, the story will revolve around Rin and her master. According to the announcement page of Comic REX, Rin-chan Nau's manga will include a CD, and will have Hiro Tamura as also the main illustrator.

Faceset used in the PV of the song 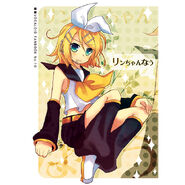