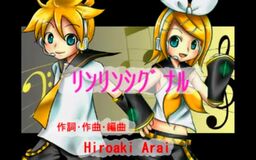 "Rin Rin Signal" is Signal-P's first work, which became notable to the point that that word "Signal" became his P name. The song has over 710,000 views on Niconico and over 1,000,000 on YouTube. On December 28, 2007, a day after the Kagamines were released, Signal-P uploaded "Rin Rin Signal test version", a short version of the song, and he uploaded the full version a week later on January 7, 2008.

The song is mostly centered around Rin and as the song goes on, she often mentions how much she wants Len to recognize her love for him through the "Rin Rin Signal" as the title claims - "her heart ringing" for Len. Mid-way through the song Len sings the second verse. He is portrayed as loving Rin but is unsure of how to tell her of his feelings, face-to-face. Rin calls his methods of love "mean" but refuses to let go.

Rin continues expressing her seemingly endless choice of words for her love for Len until he finally admits he can hear her signal, implying he loves her the same.

This song was performed at the MikuPa Live in Tokyo 2011 concert.

The Append mix of "Rin Rin Signal" has been featured in several games.