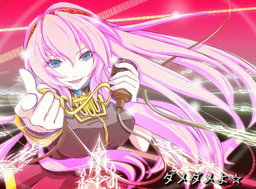 This song is samfree's first original work using Megurine Luka and became one of Luka's most notable early hits. It's a eurobeat song of a 2D woman who wants to break through the "dimensions".

Five days after it was uploaded, the song quickly became popular and reached hall of fame (exceeding 100,000 views). It also ranked the Vocaloid Weekly ranking number 72 (rank 6). This is quite an achievement for the song Luka Luka✭Night Fever to be up so high, for the other songs on top of the rankings at that time were hits such as Ginsaku's "Iroha Uta", Agoaniki-P's "Double Lariat" and minato's "RIP=RELEASE". One year after it was uploaded (March 7, 2010) the song reached 1 million views.

It's also featured in various compilations, such as EXIT TUNES PRESENTS STARDOM 2, VOCA NICO☆PARTY and VOC@LOID GENERATION. On June 25, 2012, in Konami's game "DANCE EVOLUTION ARCADE", the song Luka Luka✭Night Fever was featured there (a cover, not the original version by Luka).

This song is also one of the tracks for samfree's Night Series and overall the most notable track in the series, along with other tracks such as "Megu Megu Fire☆Endless Night" and "Lily Lily★Burning Night".

I know you better than anyone
So leave it to me
Don't be afraid, let's get dancing!

I know you better than anyone
So tell me everything
Why are we here? Let's find out together